For decades, LGBTQ shows and characters have been a part of the anime industry. Yuri anime isn’t your typical thought. It depicts a beautiful loving relationship between females.

If you have mixed feelings about lesbian anime, check out our list of top 10 best yuri anime since it could alter your mind. 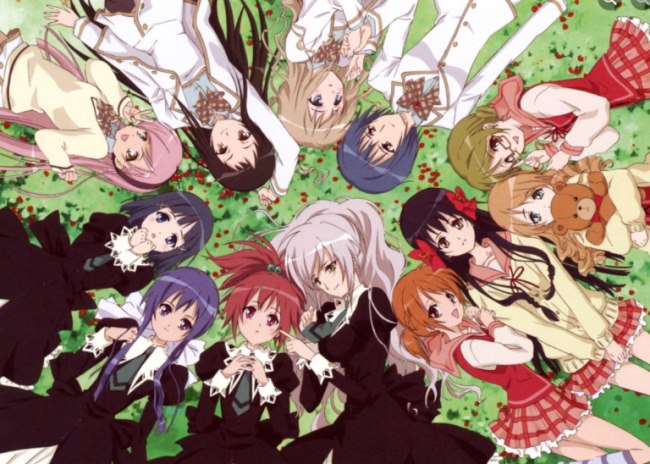 The main female character of the Strawberry Panic anime is Nagisa Aoi, who is a transferee of St Miator Academy for girls. At this school, she meets a beautiful girl named Hanazono Shizuma, the academy’s popular girl.

Surprisingly, Nagisa has the ability to attract Shizuma’s attention. As anticipated, they end up falling in love. In the anime, Shizuma makes the first move by kissing Nagisa’s forehead.

Overall, the series depicts love, heartbreaks, romance, treachery, school polities, and others through its various characters. As a result, it’s a terrifying tale, which can capture your attention from beginning to end.

In addition, instead of focusing solely on the main lesbian couple, it includes several couples, all of whom are LGBTQ. 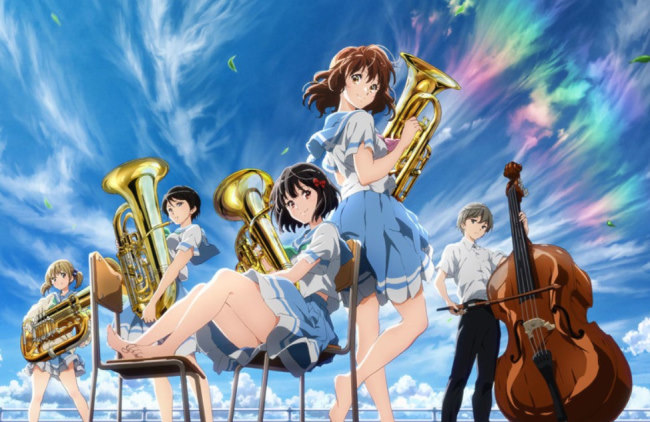 This is a yuri anime about music. In the series, Kumiko Oumae, who is a euphonist, attends high school looking for a new start after she swears off the music because of an incident in a middle school competition. At the high school, she happens to be surrounded by folks who are interested in a brass band.

Kumiko rekindles her passion for music with the support of her brass bandmates, such as Hazuki Katou, the band’s tubist, experienced contrabassist Sapphire Kawashima, and her fellow euphonist Asuka Tanaka, who is also the band’s vice president.

Chaos, on the other hand, reigns supreme within the band. Despite their present goal of qualifying for the band competition at the national level, simply participating in local festivals will be difficult until Noboru Taki, who is the new band advisor, takes action.

In the midst of the chaos, there are sweet moments shared between the two female characters, Kumiko Oumae and Reina Kousaka.

Yui Yamada is a high school student who enjoys gardening and plants. She begins dating Tomoka Kase, who is the biggest star of her high school’s track team.

While Yui is timid, feminine, and has never had a boyfriend, Tomoka is vibrant, tomboyish, and well-liked by her peers. Despite their many differences, they have tried to understand and encourage one another while enjoying the rush of excitement that comes with first love.

Asagao to kase-san’s a touching story about 2 girls struggling with their growing feelings for one another, as well as other issues that affect the ladies in love. 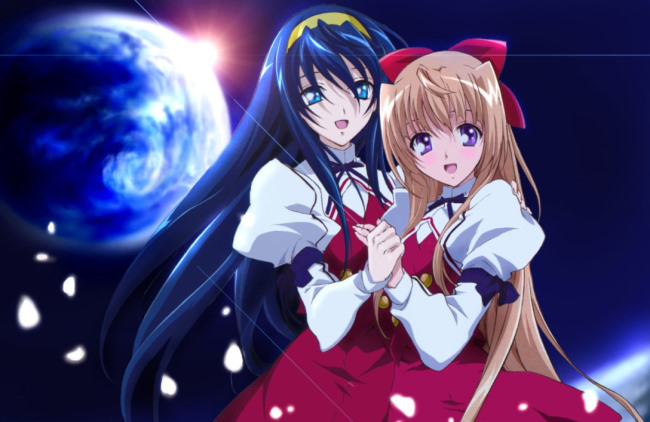 The anime starts in a village named Mahoroba. In this village, time is slower for both humans and nature. Here, there are 2 students, Chikane Himemiya and Himeko Kurusugawa, at the elite Ototachibana Academy. The series centers on their relationship.

They are as different as night and day. While Chikane is bold and exquisite, Himeko is timid and unassailable. Regardless of their differences, they are in love with each other, and however hard they try, they cannot be separated.

An incident occurred on their shared birthday, as a friend attacked them. When things seemed hopeless, the lunar and solar priestess abilities embedded in the 2 main female characters awaken, expelling the evil.

Nevertheless, that’s only the beginning. They now have to defend themselves against a slew of other threats, even those who are closest to them. 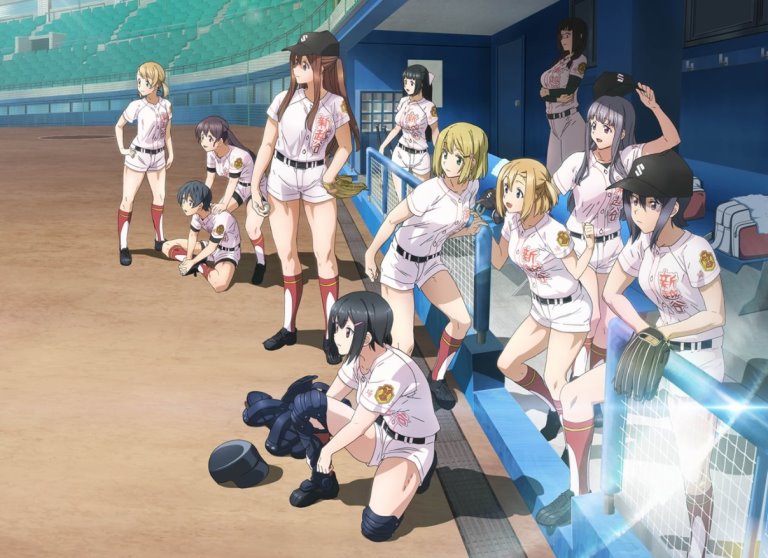 Tamayomi is a yuri baseball anime, which mainly focuses on the loving relationship between 2 childhood friends, Tamaki Yamazaki and Yomi Takeda. They have been baseball fans since they were children.

Whenever they could, they would play catch together. It was through this activity that Yomi found her knack for tossing the baseball in a magical way. The girls pledged to continue playing the sports when they grew older, but they were separated almost promptly.

While Tamaki became a brilliant catcher in the following years, Yomi didn’t fare well regardless of her incredible throwing ability. After deciding to give up her passion for baseball, Yomi became a 1st-year student at Shin Koshigaya High.

Despite her best efforts to avoid everything baseball-related, she meets Yoshino and Ibuki Kawaguchi, twins and baseball superfans. She also runs into Tamaki and plays catch, which reignites Yomi’s passion to pitch.

The two girls work together with Yoshino and Ibuki to bring the baseball team of their school back to life and aim to win the national competition after a long break. 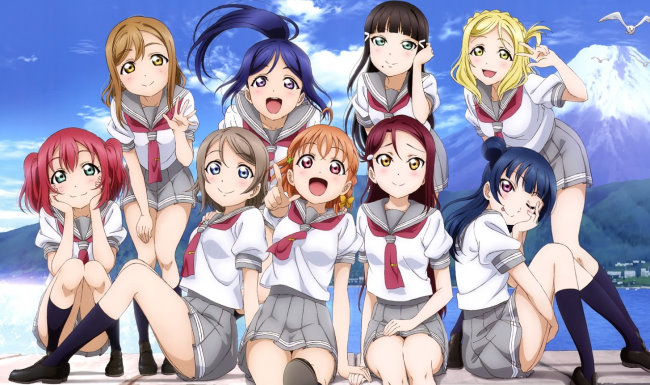 Chika Takami has never attended any clubs or possessed any outstanding abilities. After a trip to Tokyo, the young girl discovers school idols’ world, which is a realm that allows even a regular girl like her to shine.

Chika gets her inspiration from the past school idol groups and is determined to launch her own idol club at her all-girls high school in her coastal hometown.

However, even before recruiting members to join her club, the aspiring founder encounters her largest stumbling block which is Dia Kurosawa. She is the student council president who adamantly opposed the club’s formation.

When it appears that there’s no hope, Chika encounters Riko Sakurauchi, a student transferee. Chika sees her as a promising candidate despite her shyness and talent as a pianist, and it’s not easy for the club founder to persuade Riko to join. Regardless of various difficulties, Chika decides to forge on and overcome them to forge an idol group that rivals the previous 9 coming before her.

Essentially, three primary girl couples have emerged in this season of Love Live, including Maria Ohara and Kanan Matsuura. The others are the love triangle between Riko, Chika, and You. Riko makes an outright love declaration to Chika and ensues You’s jealousy.

A new school year heralds a slew of new opportunities, one of which is participating in a club, Yui Hirasawa, who is undecided about the club she wants to join, becomes an applicant for Light Music Club (LMC) because she misunderstands that she just needs to play simple instruments like castanets. Later, she visits to apologize and quit because she cannot play an instrument.

However, because of lacking members, the LMC may be disbanded. This leads to club members offering anything including food, lazing during club time to persuade Yui to join.

In spite of their best attempts, Yui refuses to stay because she lacks musical experience. After playing a musical piece for Yui as their last resort, they ignite her argent passion and succeed in persuading her to join them.

There isn’t a lot of yuri subtext in this series, and most of it comes from Mio Akiyama’s and  Ritsu Tainaka’s connection. 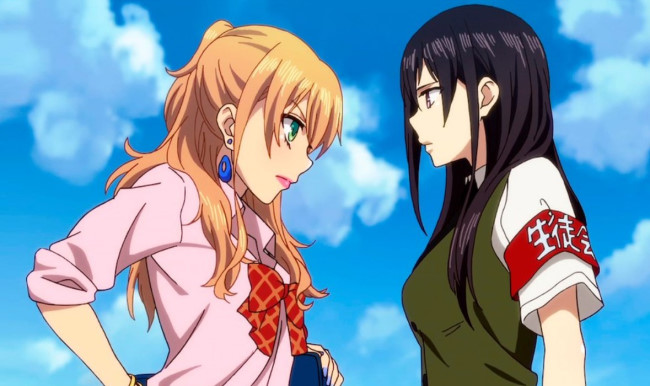 The Citrus anime follows Yuzu Aihara as she relocates after her mom remarries. Yuzu is overjoyed, believing that she would make new friends and find a boyfriend at her new school. However, life turns out unexpectedly as it’s an all-girls school.

She meets Mei Aihara, the most obstinate girl at school and the president of the student council. There isn’t much room for yuri scenes in the 1st episode, but after the story continues, the lesbian scenes will strike you like lightning.

Citrus has 12 episodes, each of which is three minutes long. So, there’s no way you will notice a gap in the plot. Instead, in this uncommon yuri anime, you’ll be treated to a lovely and charming story. It wouldn’t be right if it wasn’t included in our list of the top 10 yuri anime. 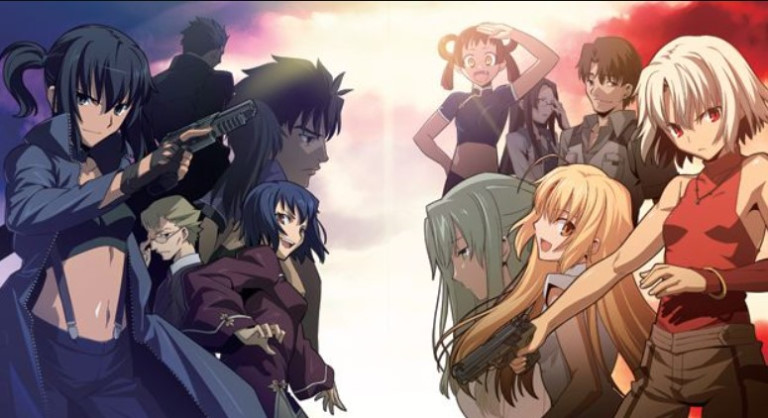 Maria Ōsawa’s a photographer from Japan who is currently based in Shanghai, China. Maria looks for potential interesting tales throughout the Chinese city with her sidekick Mino.

When unusual things happen during a local festival, the duo investigates it right away. Suddenly, they find themselves in a middle of a fight between unknown masked guys and a weird white-haired woman.

Just as Maria is about to get shot, Canaan, an old acquaintance, emerges and assists her in escaping. However, a terrible conspiracy involving a deadly disease soon emerges. Canaan realizes that she must face her past to stop the culprit and save her friends.

Canaan contains a shocking amount of yuri despite being an action anime. The focus is on Canaan and Maria, and they are as close as possible to a real couple. 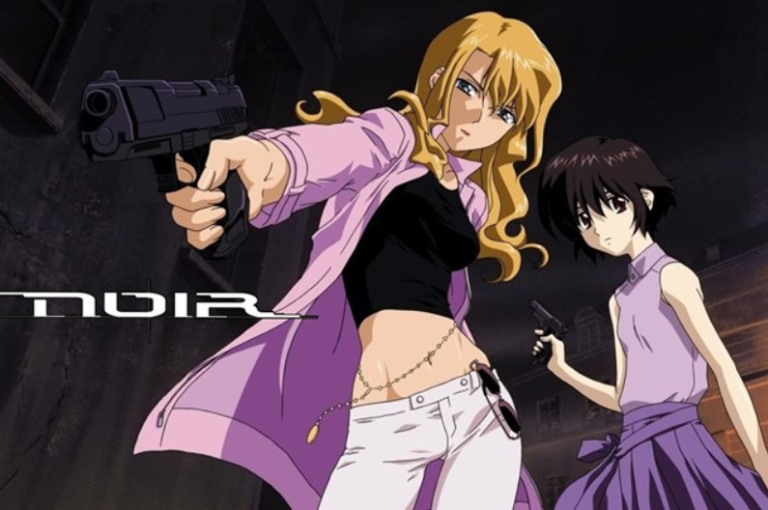 Mireille Bouquet is a hired assassin who receives an odd message from Kirika Yuumura, who is a Japanese student, urging Mireille to go to the past with her. Initially dismissing this email as foolishness, she reconsiders as it starts to play a tune she remembers from her childhood.

Mireille agrees to link up with Kirika after sensing a common history between them. The two go on an adventure to unravel their past mysteries. Their tenuous partnership is put to the test when they start accepting jobs, but each of them brings the women closer to the desired closure.

The majority of yuri scenes in Noir are inferred. That isn’t to imply that there isn’t something positive going on. Mireille and Kirika’s connection evolves from a tight business relationship to friendship over time.

So, there you have it. The most comprehensive top 10 best yuri anime list available. Are there any additional series that we may have overlooked? If you have any suggestions, please share them by commenting below. These titles may be featured in our next list about yuri anime.