Behind every good story are the characters. That mentality is more true in every anime series. It has at least one or more anime duos that click on different levels. These characters serve a crucial role in the success of the story.

Whether they’re best friends, brothers or enemies, these best anime duos still have something unique and fun to watch on screen together. Let’s talk about them now! 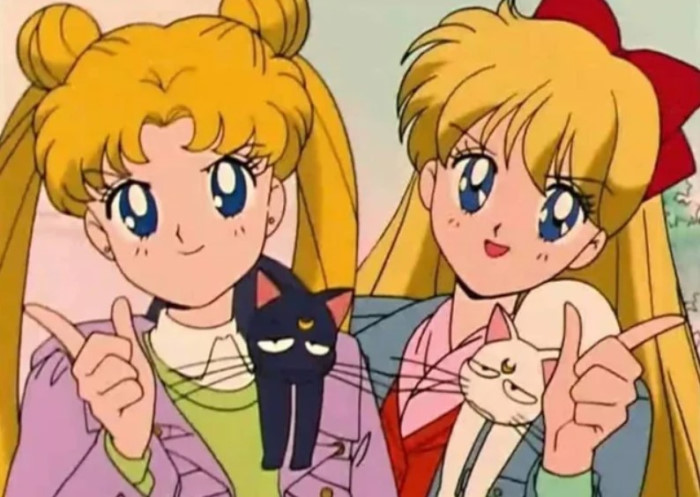 In the anime, Sailor Venus is the leader of the Inner Senshi in the first place. Sailor Moon is the Princess, so she’s meant to be protected by warriors. And Venus is the one leading the Guardian Senshi with the effort to protect Princess Serenity.

In appearance, these two look like twin sisters. For this reason, Sailor Venus used to disguise as Sailor Moon from time to time.

What makes us put these dynamic duos on the list today is their bond on and off the battle. They’re always seen together and seem to click well in every fight. That explains why they’re the perfect female duo in the series.

Android 17 and Android 18 are some of the deadliest anime duos in the roundup. These two were created to kill Goku. They’re cyborgs even though they were initially human teenage twins named Lapis and Lazuli. After getting kidnapped by Dr. Gero, they turned into Android 17 and 18.

The two appeared similar in different ways regardless of the little differences in behaviors. With their infinite energy, it’s easy for them to defeat future Gohan. Yet, this sister duo decided to keep Gohan alive because they both thought that he was not a threat to them. 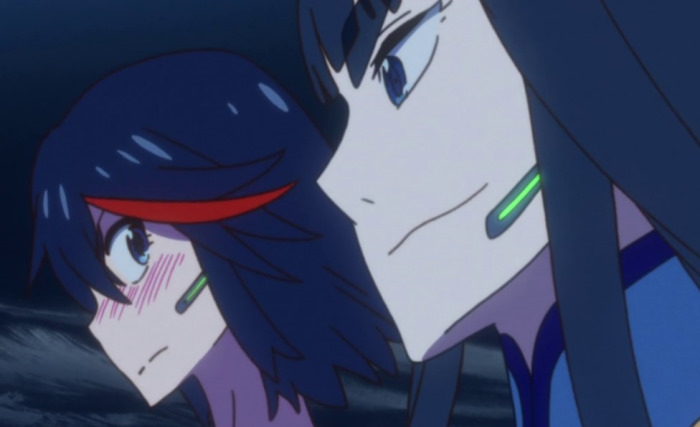 A fascinating anime is often as good as its protagonist, and Kill La Kill had that! It’s about a schoolgirl on revenge after her father’s death. Her vengeance put her into conflict with the leader of their student council, Satsuki.

With her weapon, Secret Sword Bakuzan, Satsuki is undoubtedly the badass character in the series. Besides, she was more intelligent and more powerful than the Ryuko character.

Through the story, it’s clear that Satsuki is the hero of Kill La Kill though she cannot defeat her mother. In fact, these two are siblings in which Ryuko is the younger sister. 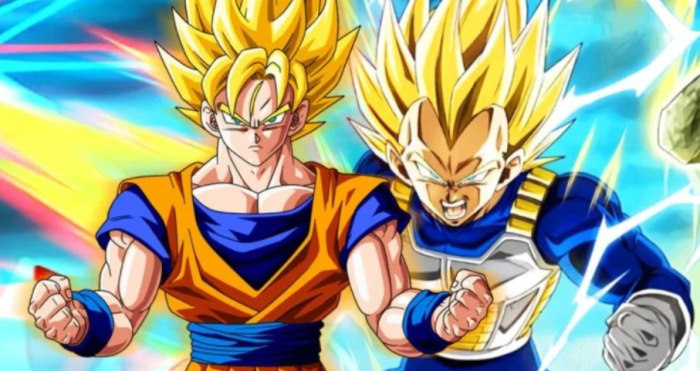 As Goku first met Vegeta, he was weaker than Vegeta. However, Goku pushed himself further to defeat Vegeta on his own. Even though they are not always good friends, the two have saved one another’s lives many times. If Goku saves Vegeta from Krillin in the first place, then Vegeta does a lot more for Goku’s well-being in the franchise.

There’s something in common between these two: they have died twice. Every character in Dragon Ball tends to face death at least once. Only in the series, death is temporary. Last but not least, they’re some of the strongest anime duos on the list. 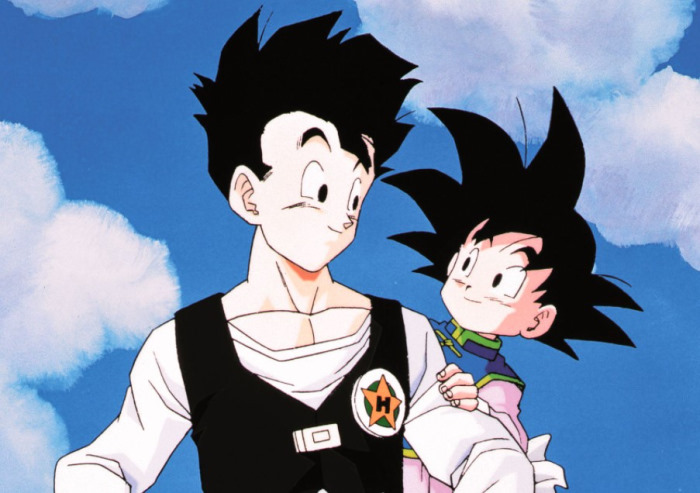 We also have brother duos from Dragon Ball. They’re Gohan and Goten. The two are Half-Saiyans. They were born with boundless potential in Dragon Ball. The franchise witnesses Gohan growing from a toddler to a real man. He has to go through continuous conflicts against the likes of Vegeta, Nappa, Frieza, and so on.

On the other hand, Goku’s second son, Goten, hasn’t been sent to another space to fight an evil enemy. Despite his easy life, Goten still broke Gohan’s record for becoming the youngest Super Saiyan by four years. Though he owns the most potential of his father and brother, he hardly focused on anything. 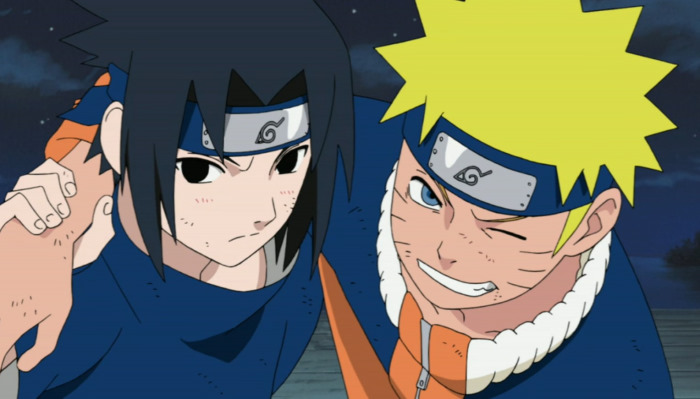 Naruto and Sasuke make the iconic duo around here. They are two of the most powerful Ninjas around.

Sasuke used to leave the village to increase his power. At that time, the villagers gave up on him, except Naruto. He promised to bring Sasuke back from the depths of darkness. Not only that, but Naruto also taught Sasuke the importance of friendship and many other things.

They’re equal in some areas and do better than one another in some other ways. The two are also the protagonists of Masashi Kishimoto’s Naruto franchise. Both of them joined several rough battles, and their friendship also reached triumphs. No doubt, they’re basically the best anime duos of all time. 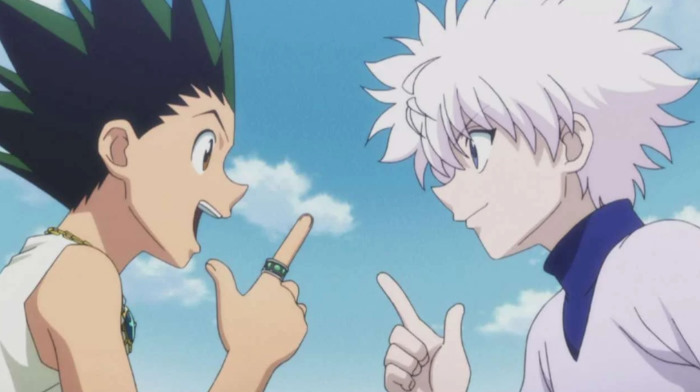 These two stand out the most in the Hunter x Hunter series. Through the anime, it’s clear that Killua outdoes Gon. With the abilities of a Transmuter, Killua is able to make a lightning aura. For raw power and Nen ability, Gon will win.

Besides, Killua respects Gon for who he is. Also, he realized that Gon has always saved him and made the best out of all situations. Two of them work perfectly as a team because they can push each other to get stronger. In the series, there are very few best friend duos having power and teamwork like these two.

Every fan knows that finally, these two ended up together after 200 episodes. In a fight, it was Kagome putting her life at risk by kissing a half-demon. She did that during his transformation to save him.

The love of this couple is appealing and unconventional. After such a long journey they have been through, it’s easy to feel happy to see them choosing each other.

They’re also the funny anime duos that are hard for us to take eyes off from the start. Kagome used to see naked Inuyasha floating around. The whole scene is quite funny, especially when Jaken’s efforts to make Sesshoumaru proud. 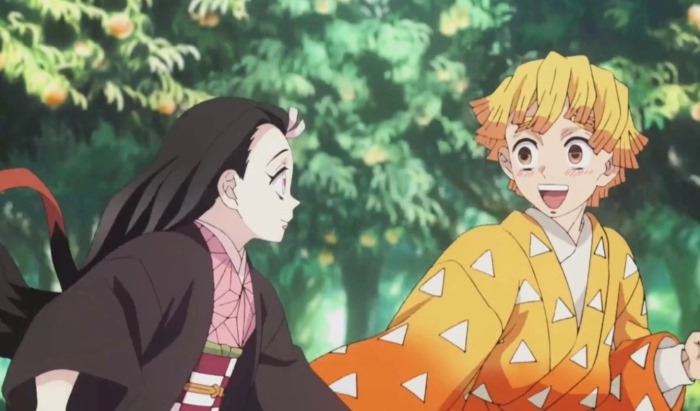 The most loved pair in the whole Demon Slayer series is Nezuko & Zenitsu. Zenitsu has a crush on Nezuko, which explains why he always convinces her to marry him. Yet, what’s fun about them is that Zanitsu never misses a chance to talk to Nezuko. It does not matter if she’s a demon who cannot converse with humans, Zenitsu still runs behind her.

Though Zenitsu knows that Nezuko is a demon, he puts his life at risk by not letting anyone harm her. He’s probably a coward, but as it comes to Nezuko, he has no mercy towards the enemies. 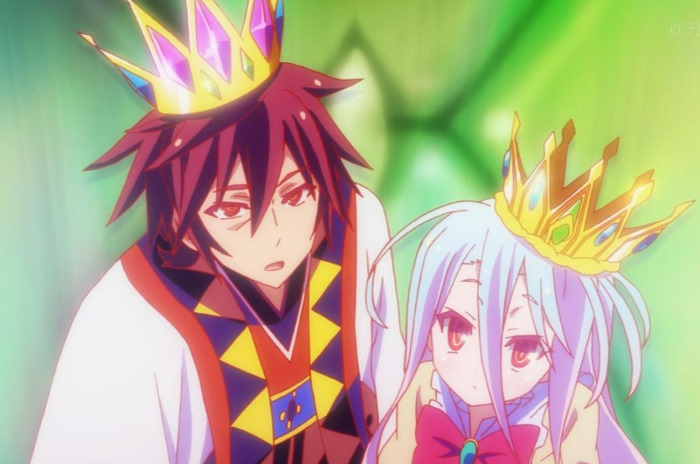 Sora’s father married Shiro’s mother, so you can call them step-siblings. For Sora, he sees Shiro as someone he needs to protect. In the first scene, Sora tries to guard her off getting hurt in many ways. It’s possible to say that they created a bond that goes beyond the ordinary boundaries of friends.

Through No Game No Life, they grew up together and even shared something in common. For that reason, they can work well together and even anticipate one another’s actions. Both of them can recall memories and control their environment.

That’s it for our list today! You may hear about anime duos in real life, but the above couples make it far more literal. No matter what relationship they have, as long as there’s a connection between them, they’re a duo.

So we hope you finally found your favorite anime duos. If there’s anyone we missed, leave your comments below. We’re sure to add them for the next post. But till then, do not take your eyes off more fantastic duos in the near future.