Earrings are a type of accessory that can show off the charming personality of their owners, which is particularly true for anime characters with earrings. As evidence, our article will give you the top 10 coolest characters in the anime universe with their ears pierced.

Maria is a witch living during the era of the 100 Years War in France. She is powerful but kindhearted and hates war. Therefore, she routinely conjures familiars to end skirmishes, earning her praise from the neighboring hamlet but scorn from the Church.

Maria has pale skin and blue eyes, with short blonde hair. She wears 2 big earrings and a black tiny dress.

Regarding personality, Maria is a caring, determined, and idealistic girl who abhors violence and bloodshed. She is a wonderful woman who is willing to help those in need, even if they have wronged her in the past. 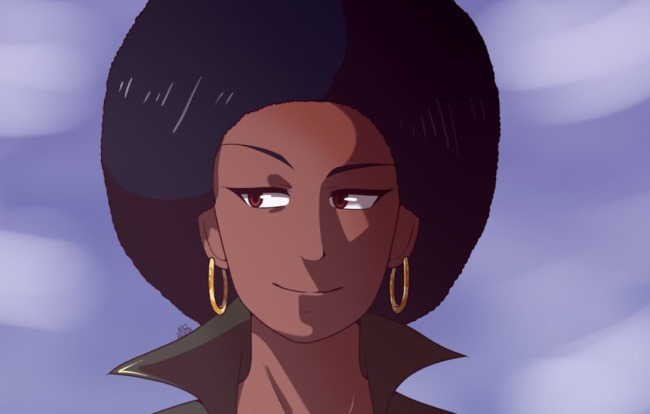 On Io – one of the Galilean moons of Jupiter, Coffee was on the hunt for a bounty hunter named Domino Walker, and she began by asking around about him.

She makes an appearance in the “Mushroom Samba” episode, in which she meets Edward. Later, she discovers that Ed is also a bounty hunter and joins him on his search for a farmer who grows uncommon drug-like mushrooms.

Coffee is a black woman with her Afro hairstyle. She wears earrings that really pop.

Atsuko Jackson is a police officer who grew up in an orphanage with Michiko Malandro, who appears to have a grudge against her. She is a tall, slim woman that has dark brown skin, grey eyes, and large blonde afro hair. Because of her hair color, the black earrings really stand out.

When Atsuko and Michiko were small and shared the same orphanage, they would frequently assist one another. However, they have a love-hate relationship between them after growing up.

Belldandy, also known as Blessed Bell, is a deity who aids a college student. She possesses magical powers as well as the wind as her attribute. Because of Keiichi’s wish, Belldandy met and became his wife.

Later in the anime series, Keiichi developed deep feelings for Belldandy, but the relationship was forbidden since humans and goddesses couldn’t be together. However, Belldandy is a lovely goddess who goes out of her way to aid Keiichi as much as possible.

The character is feminine with her flowy clothes and pieces of fine jewelry like her earrings, bracelets, and rings.

One of the coolest characters that have earrings is S.A.M or Special Associate Model. She is a high-end robot that has been separated from Prince Kelby, who is her best friend as well as the heir to Botica.

She has big eyes with long lashes. Her skin is dark and her lips are even darker than her complexion. She wore golden earrings and a button nose. Since S.A.M is a friendship-programmed robot, she is gregarious and loyal to people registered as friends.

She has a naive and innocent attitude on life, perceiving everything via rose-colored glasses.

Tanjiro Kamado is a demon slayer. He joined Demon Slayer Corps to discover a way to transform his sister back to a human as well as to hunt and kill demons. He later promised to destroy the Demon King to protect other people from suffering like his family.

Tanjiro is an average-height, muscular young boy with a tanned complexion and an athletic build. His black hair is ruffled with burgundy tips.

Tanjiro earrings are unique hanafuda ones depicting the sun that rises over a mountain.

He is a naturally kind individual. He is extremely determined and won’t give up after setting a goal for himself. Moreover, Tanjiro is straightforward and forthright, taking everyone’s words seriously.

Potara earrings, which are green earrings, are solely supposed to be worn by Supreme Kai.

They can provide their wearer special abilities, such as the usage of the Time Rings, which are only available to Supreme Kais. Potara can also fuse 2 humans into a single creature for 1 hour, however, if it involves a Supreme Kai, the fusion will become permanent.

Cadis is highly attractive when compared to both humans and nobles. He received his cross earring from somebody who had locked his powers. Normally, he wears the school uniform.

Cadis is not from the twenty-first century and belongs to a different timeline. Therefore, he isn’t familiar with modern technology.

Cadis can seem chilly and aloof to others, yet he is nice to humans. Because of his high status in the anime, he is able to do whatever he wishes. Cadis possesses various powers including telepathy and speed.

Takashi Mitsuya has founded Tokyo Manji Gang and is the 2nd Division Captain. He is a young man, who has sagging lavender eyes and short silver-lilac hair. He wears a black earring decorated with silver crosses as his distinctive cool earring.

Mitsuya is a calm, collected individual who also serves as the gang’s source of optimism. Even though he is a pacifist who prefers to avoid conflict as much as possible, he will fight to protect what he values.

His shortened name, Trafalgar Law, is more commonly known. He is a member of North Blue, serving as a captain and doctor of Heart Pirates. Law is a thin young man who stands at a good height.

Except for his sideburns and a small goatee, the hat hides most of his short dark hair. He also has lots of tribal tattoos inked on his arms. Additionally, he wears a pair of little ear piercings, which adds to his fierce appearance.

As can be seen from our list of anime characters with earrings, getting ears pierced doesn’t necessarily indicate that you are frigid or rebellious. It’s just a way that these characters express their unique personality. Furthermore, earrings may simply be a means of becoming fashionable.