You don’t see Japanese people with yellow hair, unless they have dyed it, of course. However, the anime world doesn’t follow any logic of nature, thus we get to see a lot of anime characters with blonde hair. They are usually assigned with a rather important role and unique personality to match the exotic color.

In this article, we will present to you our Top 12! 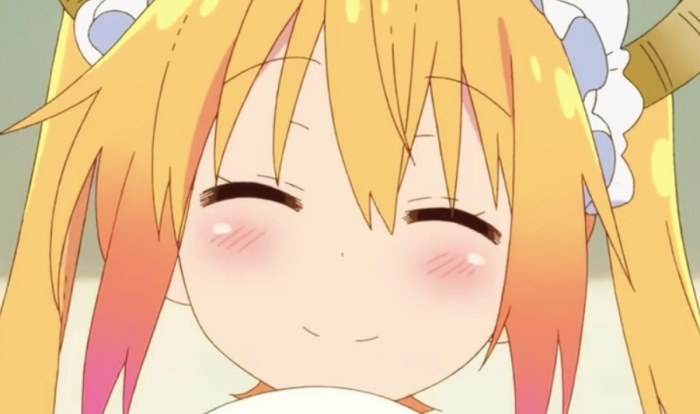 A dragon as your maid, how unique and bizarre is it? In her human form, Tohru easily steals hearts and captures eyes with her cute pigtails with the tips red like fire, which commend her red eyes with yellow in the center just perfectly. What makes her stand out is the signature horns and scaly tail contradictory with the fluffy maid costume.

Early in Miss Kobayashi’s Dragon Maid series, Tohru seemed to have difficulties in adjusting to human principles and getting along with people. Her true nature – kind, naïve, and energetic – is only expressed when she is with Kobayashi. How can you not love an adorable dragonkin who puts you over everyone else and willingly does everything she can for you? 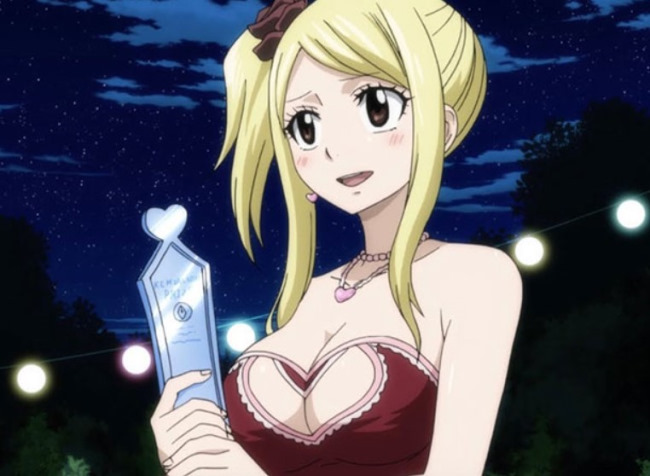 Lucy Heartfilia from Fairy Tail is such a lovely girl with a fairly attractive and sexy appearance. As a result, she takes pride in her beauty and confidently shows it off without hesitancy. The shoulder-length golden hair adds a bit of cheekiness and cuteness, earning her a spot in our ranking.

Besides her beauty, Lucy is also one of the smartest members of Fairy Tail. She loves reading and writing as much as she craves knowledge and wisdom. There’s nothing surprising about her owning a massive fanbase. 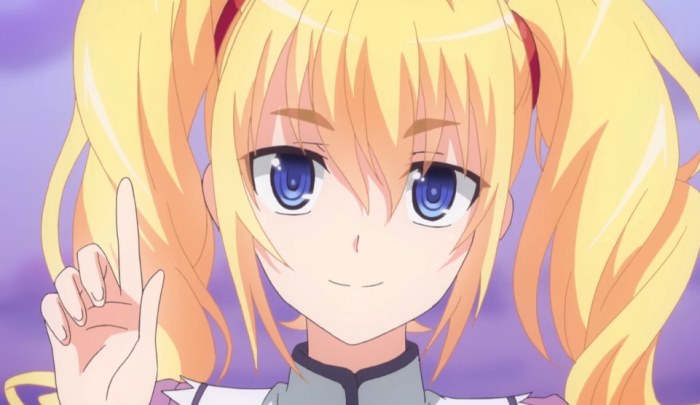 Out of four children of the Phenex family, Ravel is the youngest and also the only girl. Therefore, she was quite overly indulged and arrogant at first but gradually grew up into a fine lady with elegance and manners.

Rather than sheer strength, Ravel is destined to be a strategist, putting her intelligence to good use. When missions are involved, the beautiful blondie is stern and demanding, holding high expectations of her inferiors. This mature attitude is gone fast, however, in certain situations, and we can see the wayward Ravel fighting for trivial things again. 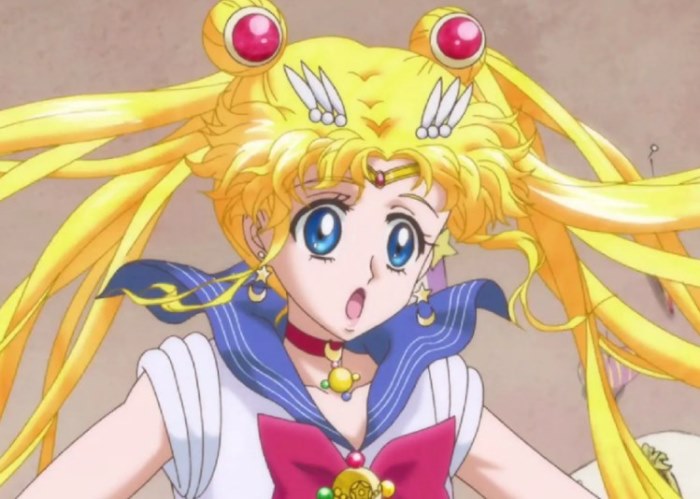 The famous Sailor Moon, known as Usagi Tsukino, has long blonde hair tied into two small buns with long tassels falling seamlessly past her hips. The innocent-looking hairstyle makes such a lovely combo with her usual attires.

As the anime series began, Usagi debuted as a naive and somehow immature girl who rarely keeps her emotions under control, but she is pure and courageous from the bottom of her heart. Not a lot of people can see the good in dismays and enemies, and Usagi is capable of that regardless of the situation.

With such beauty and many virtues, it is obvious for Usagi to be the favorite anime character of young audiences, especially the girls.

5. Mirai Kuriyama (Beyond the Boundary) 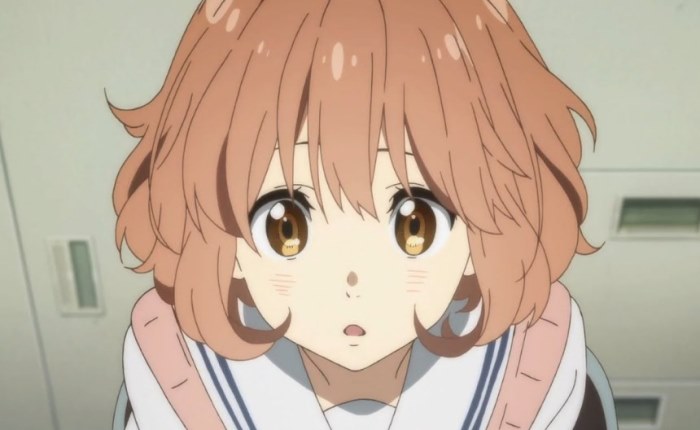 We hardly ever see a combination cuter than strawberry blonde bob hair, and Mirai Kuriyama from Beyond the Boundary effortlessly aced it with her peachy hair color and cute glasses.

As the nerdy appearance indicates, our Mirai is shy and clumsy, unlike what we usually expect from a blondie. And the surprise continues when we learn about her ability to manipulate blood and conjure weapons from it.

Even though this kind of power is unique and formidable, Mirai can’t utilize it to battle and slay youmu like other warriors due to her own fear about facing them, hence she struggles to supply herself financially.

What will her character development be like? You need to watch the series and find out! 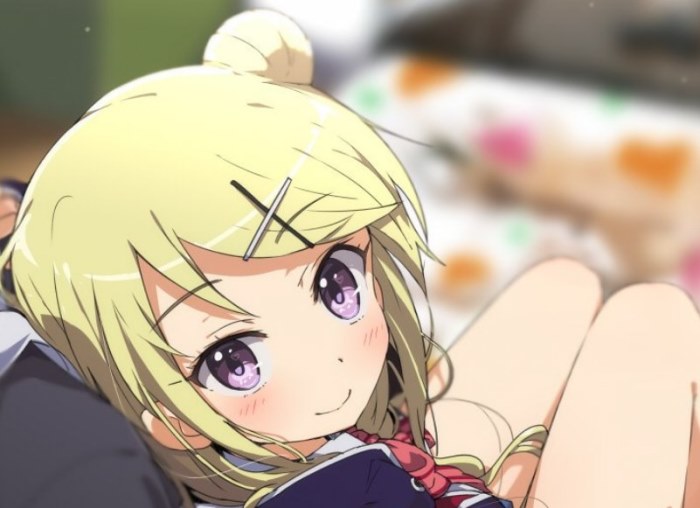 Bright blonde hair, purple eyes, fair-skinned – Karen Kujou is described as a cute teenage girl whose features have more British vibes than Japanese vibes. Her one-sided little bun of hair shares the same look with her clothing: a little childish, a little feminine.

As seen in the anime, Karen’s family is extremely wealthy, but it doesn’t mean we have an arrogant and stuck-up protagonist here. Instead, the cutie is a ball of sunshine and always ready to make new friends. Her affectionate and energetic demeanor attracts the whole class to gather around her.

She seems immature and selfish sometimes, though we won’t deny the loyalty she has for her friends.

Kurapika is a boy with blonde hair and originally brown eyes (which were changed in later adaptations). When he experiences a strong emotion, his eye color will turn into an impressive red shade. An appearance like his usually captivates hearts at first sight.

Personality-wise, Kurapika is composed and reserved rather than chattery. After losing the ones he loves dearly, our boy became quiet and distant to new people so as to keep his mind clear. Only a few friends remain in his circle, and their happiness is what makes him smile.

Intelligent and reticent, you will only see him succumbing to anger if someone goes as far as to insult his old clan.

We wouldn’t surprised if this boy has been an important part of your childhood! He must be one of the most famous yellow-haired anime characters out there.

He’s a young ninja of Konoha who wants to become Hokage – the leader of the village – and earns recognition from others. He started as a stubborn and bratty boy, and we can all relate to him. One can deny anything about him as they wish, but facts will always be facts: behind his waywardness was a pure heart that burns with determination and kindness, and his blue eyes hold no hostility.

At first, the villagers hate him and fear him, for he is the host of the terrifying nine-tailed demon fox. However, eventually, they can no longer pretend and brush off his efforts in making himself stronger and protecting the village. 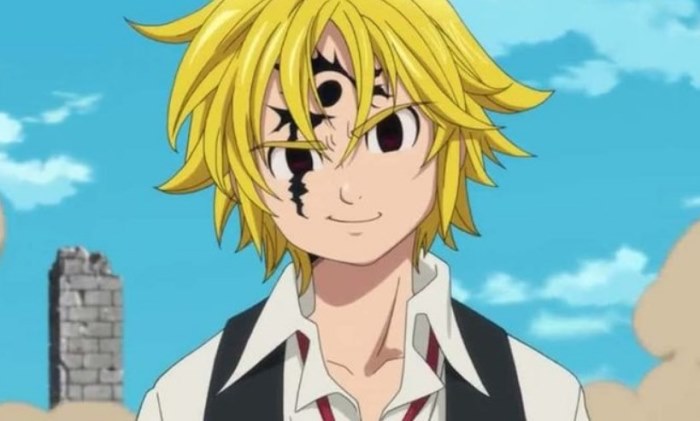 Don’t be fooled by his youthful blonde hair and green eyes! Meliodas’ age has surpassed 3,000 years old. He owns the leader position in the Seven Deadly Sins as the Dragon’s Sin of Wrath, although he appears to be calm most of the time.

The most noticeable traits about him are honesty and courage, plus a balance between cheerfulness and aggressiveness. For example, he won’t hold grudges if a friend expresses a murderous intention toward him.

Nonetheless, if his friends face a threat, it is a whole new story. He can make people tremble in his presence when furious. Call him another typical male protagonist, but will we ever get tired of seeing a guy sacrificing everything he has for the people he loves! 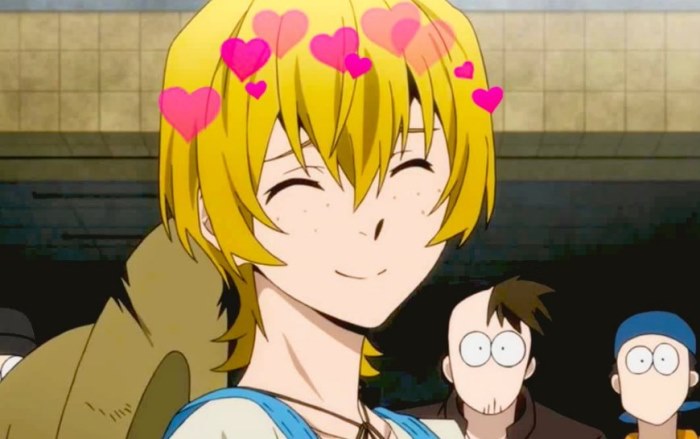 No need for exotic colors, yellow eyes still look insanely adorable on short blonde hair. If you don’t believe it, take a look at Kenji Miyazawa!

In his city, many people know him as a friendly and cheerful boy who always adorns a smile. He strongly believes everyone has kindness deep inside, no matter how they usually behave. If he asks someone questions for the sake of his investigation and they don’t admit it, Kenji won’t doubt them anymore, even showing his gratitude towards their cooperation.

Kenji’s upbringing in the countryside results in peculiar methods that newcomers can’t possibly follow but have been extremely useful to him. 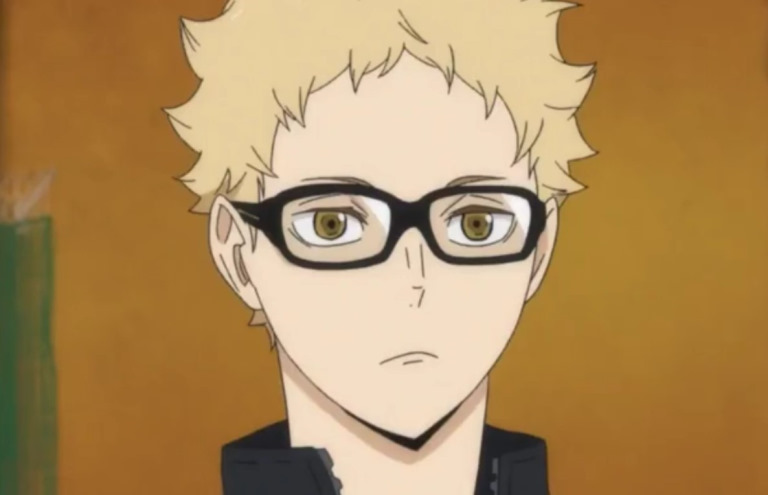 Meet the tall guy from Haikyuu!!, Kei Tsukishima! He has platinum blonde hair and bright brown eyes behind a pair of glasses, pale skin, and a very slim body. The most athletic trait about him during his first era in the series is his impressive height.

We often see Tsukishima mocking his teammates with blunt comments and scornful snickers when they show their clumsiness. Even the other teams can’t escape from his irritating attitude, and he absolutely enjoys being a nuisance to them.

Despite everything, deep inside his heart, Tsukishima only hates being looked down upon and genuinely loves playing volleyball, which makes him work hard for success. 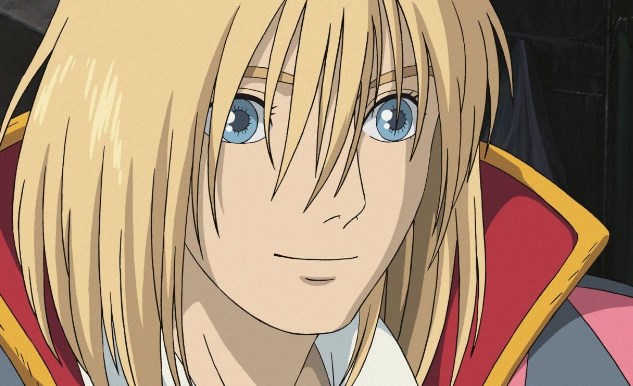 In the movie Howl’s Moving Castle, we get to see Wizard Howl adorn both blonde and black hair colors. He first appeared with soft golden hair and light blue eyes, but later on, Sophie Hatter messed up with the hair potions, and the humorous transformation began. His hair changes into a ginger shade and finally black.

Although he expresses negative traits and has his reputation stained, he is kind-hearted by nature. However, he hates quarreling and chooses to walk away instead of confronting.

Aside from his amiable appearance, the emotional conflicts throughout the movie are definitely worth watching.

And that wrapped up our list of anime characters that have blonde hair. How many of them have you heard of or known of? Who left the best impression on you? Share your opinion!